Kids Castle has reopened with more improvements for Children of All Abilities! 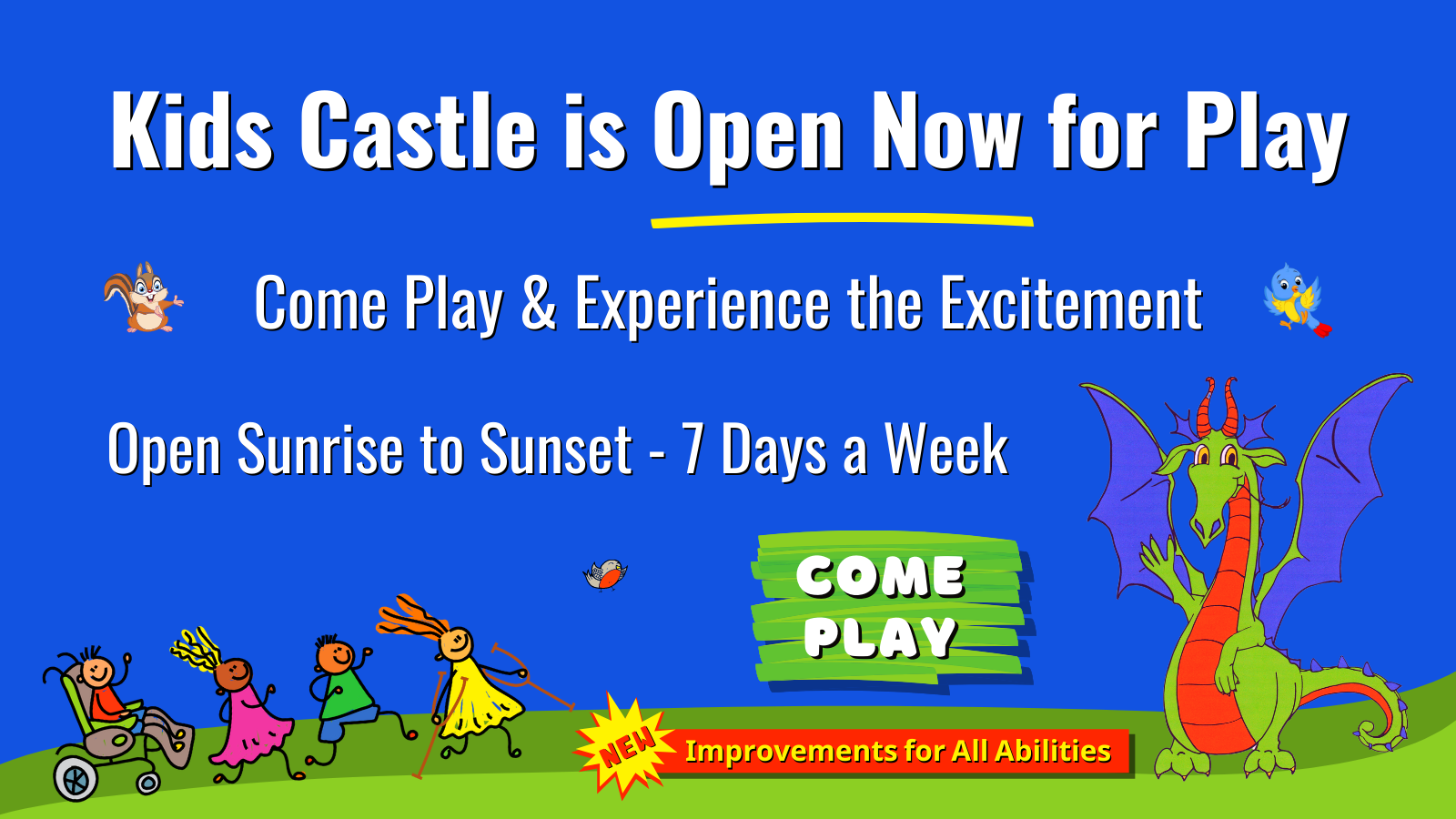 The size and scope of this most recent project was extensive.

During this temporary closure, two new inclusive play areas were created that meet the needs of children with a variety of abilities at all ends of the spectrum to encourage and enable them to play with one another.

Through these upgrades, children are able to participate equally and independently at their own skill levels with their siblings, neighbors, caregivers, and friends.

In addition to inclusive play upgrades, the size of each play area was also increased and Poured-in-Place (PIP) safety surfacing was installed.

This PIP safety surfacing helps provide equal access to all and ease in maneuverability for children and adults who use wheelchairs and other mobility devices.

We are fortunate that everyone involved with all our projects from the volunteers, construction workers, equipment vendors, and the Township staff & personnel are always ‘Kid Focused First’.

Meaning, all play features are well thought out, safely installed and inspected prior to reopening, and work is completed competently in a timely manner with a high standard of professionalism.

The successful completion of this improvement project marks another step in the ongoing ‘Build the Kingdom’ campaign, aimed at achieving and expanding inclusive play at the playground for children of all abilities including those of special needs.

These improvements at Kids Castle would not be possible without the generous support of volunteers, donors, the Township, and the entire community.

The Friends of Kids Castle volunteers continue to actively fundraise for additional upgrades that are needed.

Please consider a donation in any amount you can afford through the Donate Your Way section of our website.

All Santa Photos Ready for Downloading 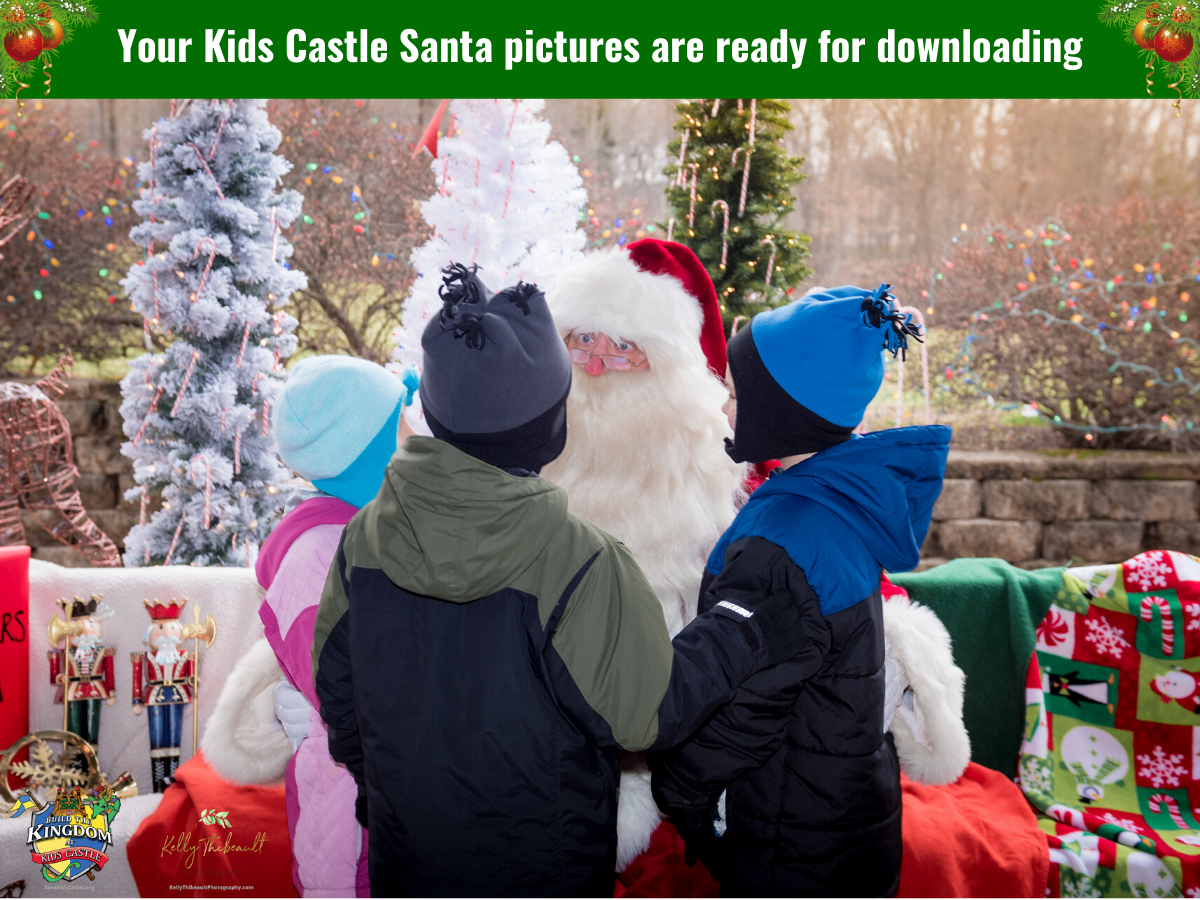 ALL SANTA PHOTOS ARE READY FOR DOWNLOADING!

Please follow the link you were given at the event, enter your email address, find your family photo and download it. Easy Peasy!

And Thank you so much to Kelly Thibeault Photography for all of the Wonderful pictures with Santa! 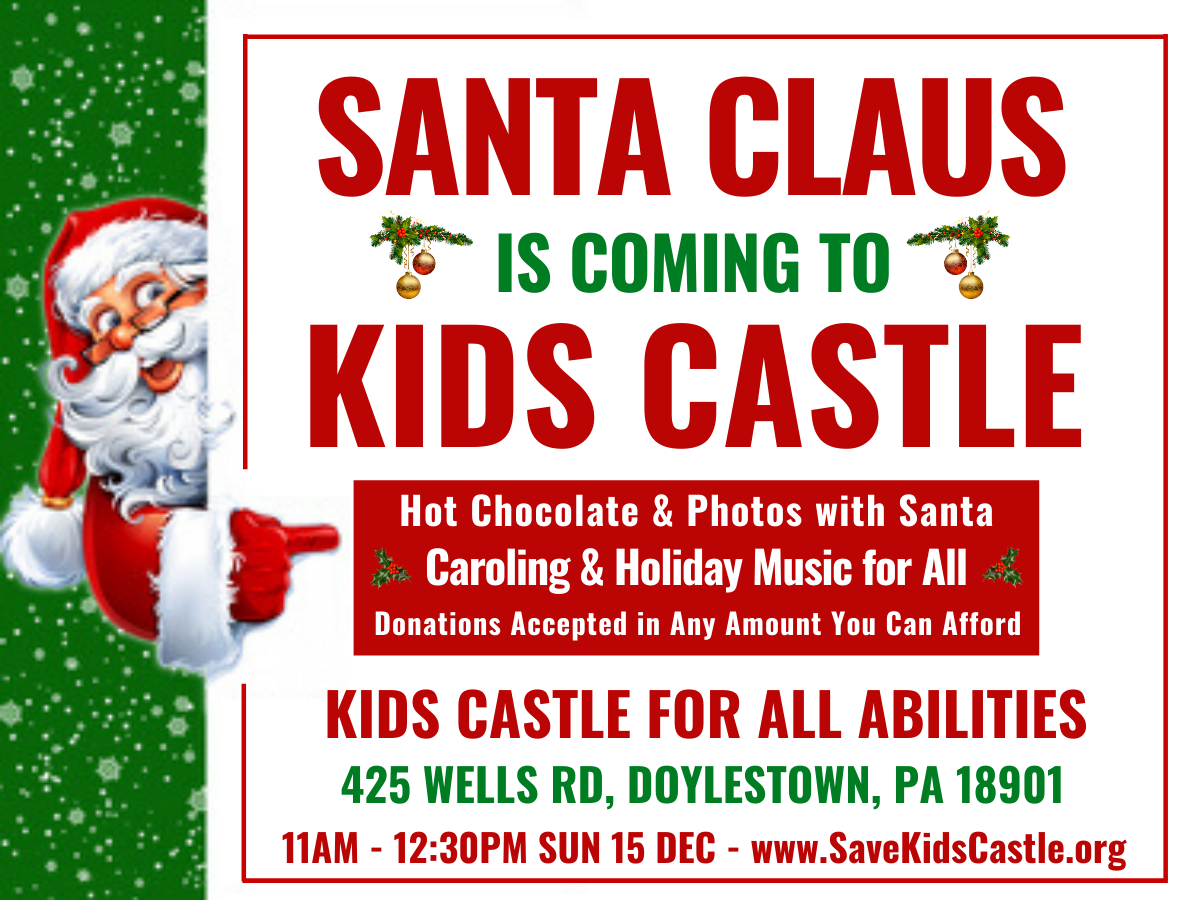 There was huge crowd of very happy people stood ready to greet Santa when he arrived at Kids Castle on Engine 19 from the Doylestown Fire Company. Additionally, Santa was escorted by the Doylestown Township Police to help him arrive safely.

There was caroling by the renowned CB West Choir, holiday music by Lobie Entertainment, Hot Cocoa provided by volunteers, delicious donuts donated by Factory Donuts Doylestown which they served to the crowd, and Free professional photos with Santa taken by Kelly Thibeault Photography who captured the moment masterfully.

Thank you to Cory Benhardt and Sarah Peters both Realtors from Keller Williams Doylestown. Cory and Sarah were gracious sponsors of our event who handed out Kids Castle flyers and spread the holiday cheer with the crowd.

To get help locating Kids Castle – you can find us on Google Maps here >> Map: Kids Castle for All Abilities

Thank You to Everyone involved!

Kids Castle for All Abilities is Now Open for Play

The Kids Castle playground is opens for play 7-days a week from dawn to dusk.

Our beloved Kids Castle playground is in its 22nd year serving the public as a free community-built playground.

Volunteers rallied together and raised over $500,000 to totally upgrade and improve the entire playground for children of all abilities, includes kids with special needs.

That dream is now a reality! Kids Castle for All Abilities is open with play opportunities for all children. Everyone can participate at their own skill level and enjoy

One thing is certain, children come to Kids Castle year-round and the playground is filled with smiling faces month after month no matter what the temperature.

Our deepest thanks to all who have helped over the many years to make Kids Castle a special place where memories are made to last a lifetime. Thank you!

Update: This project has been successfully completed

The Kids Castle playground is temporarily closed to install new play structures for children of all abilities including kids with special needs.

The Park itself will remain open during the entire project.

There is no firm dates set yet reopening. 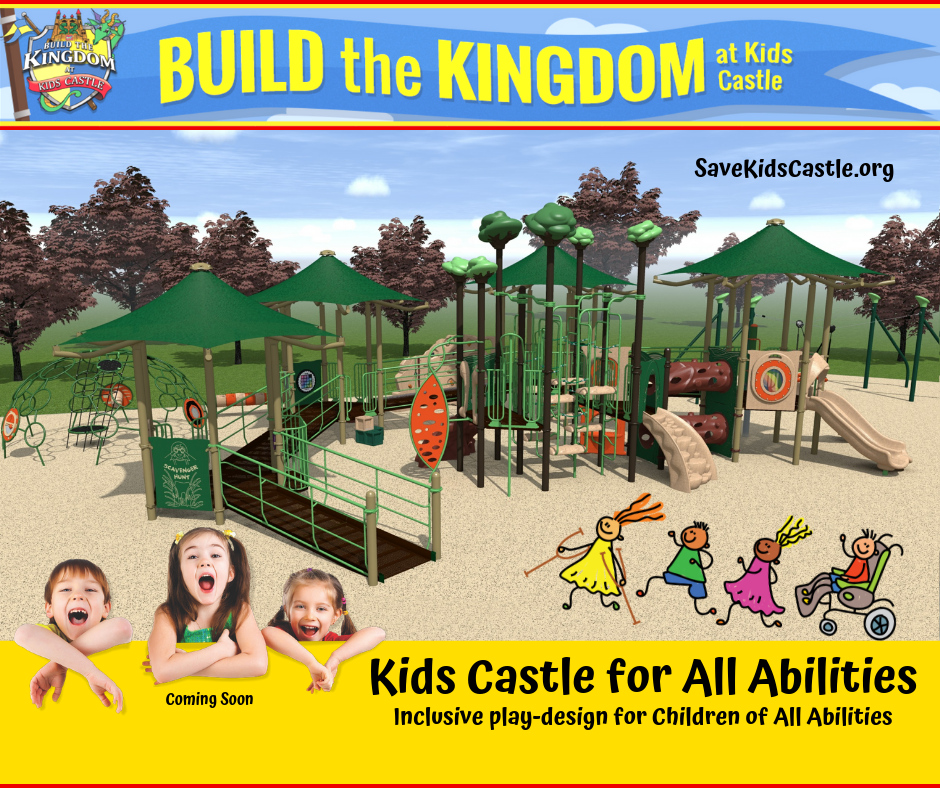 This temporary closure of Kids Castle in marks another step in the ongoing “Build the Kingdom” campaign, aimed at achieving inclusive play at the playground for children of all abilities including those of special needs.

The Friends of Kids Castle volunteers raised over $400,000 for these improvements through the generosity of individual donors, sponsors of play equipment, local businesses, grants from State and private organizations, and in-kind donations of goods and services.

During this temporary closure, new play structures will be installed that meet the needs of children with a variety of abilities at all ends of the spectrum to encourage and enable them to play with one another.

Children will be able to participate equally and independently at their own skill levels with their siblings, neighbors, caregivers, and friends. Play features are also included for children with visual impairment, hearing impairment, autism/SPD, mobility impairment, and cognitive disabilities.

In addition to these inclusive play upgrades, the temporary closure will also allow for improvements of the existing playground, including the installation of a new, more durable safety surfacing called Poured-in-Place that will also provide equal access to the playground for all.

The Kids Castle playground will remain closed until these upgrades are completed. The Park itself will remain open during the entire project.

The ongoing “Build the Kingdom” Capital Campaign Project would not be possible without the generous ongoing support of volunteers, donors, the Township, and the entire community.

Volunteers are still actively fundraising for additional upgrades to Kids Castle that are needed for children of all abilities.

Please go to the Donate Your Way Now section of our website to donate in any amount you can afford.

More updates on this Phase of the Build The Kingdom protect coming soon!

Our Story – Build the Kingdom at Kids Castle

It is our pleasure to introduce our goal to Build the Kingdom at Kids Castle where children of all ages and abilities can play together and have fun!

The plan is to add new play structures to the areas surrounding the Castle to create play environments that are usable by more kids, to the greatest extent possible.

In addition to good old-fashioned fun and fostering new friendships, these play areas will also address the developmental needs of the whole child by intentionally providing opportunities for physical, cognitive, communicative, social/emotional, and sensory development.

We have organized the area surrounding the Castle into four individual kingdoms, one of which contains equipment primarily for children under age 5.

Another contains one of our largest play pieces with ramps from one end to the other that twist and turn while elevating over four feet off the ground! It also includes multiple play areas along the way that are accessible to children of all ages, including those in a mobility device.

There are plenty more exciting updates and new play structures that we plan to add, which will be revealed shortly. And with the addition of poured-in-place rubberized surfacing throughout, Kids Castle and our Kingdom can be one of the largest fully accessible playgrounds in the area.

But in order to continue our progress we need your help. That help can come in the form of a donation as well as volunteering your time and expertise to help Build the Kingdom.

We are looking for individuals with Fundraising or Marketing experience who can be leaders in our organization and can help move the overall project forward.

As we progress with our plan, these volunteers will search out other individuals that they can help lead in a capital campaign to accomplish our goal to Build the Kingdom at Kids Castle.

Together we will Build the Kingdom. If everyone does a little, we can accomplish a lot! 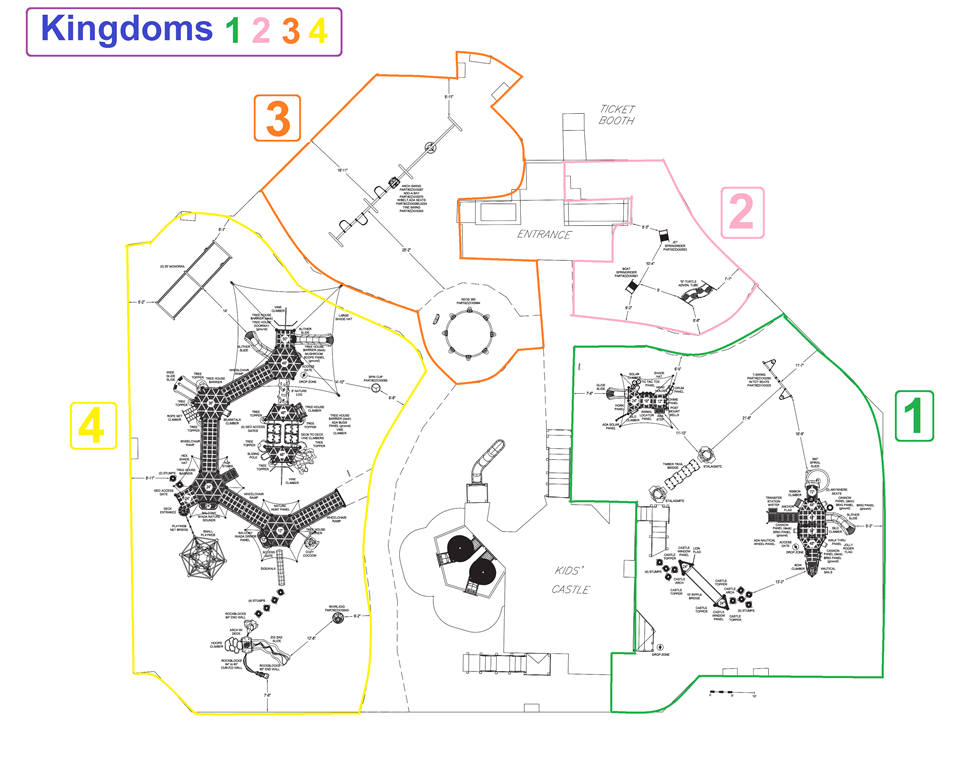 Just minutes from the county courthouse and historic district of downtown Doylestown, tucked away in the scenic hills of Central Park in the Township of Doylestown, rises a majestic and fantastic playground known as Kids Castle. Inspired by the castles of Henry Chapman Mercer, this nationally recognized and award-winning playground has attracted children locally and nationally since it was constructed in 1997.

However, having been constructed primarily with special pressure-treated wood and the best materials available at the time, a safety inspection performed in 2012 determined that the Castle and the surrounding play structures were reaching the end of their lifespan. The wear and tear had caused significant decay and damage and despite regular and thorough maintenance by the Doylestown Township staff, the structures needed immediate attention.

On May 7, 2012, an annual safety audit was conducted to assess the areas in need of attention and repair. A plan of action was formulated. The Friends of Kids Castle committee reconvened and decided to take immediate action and address the aging facility needs.

As part of the Phase I plan, the playground was closed for renovation in March 2013, volunteers in large numbers joined in to aid, money was raised and then Kids Castle reopen after all repairs were completed with a grand event on September 29, 2013 to the delight of more than two-thousand community members.

But there is still much work to be done. While the Castle is technically open and Phase I has been completed, the playground around the Castle had to be demolished due to the age and condition of play structures that were made of pressure-treated wood. As a result, new play equipment is needed.

It is our goal to create an inclusive, fully accessible playground so the kids of all ages and ability can have a Kingdom where all children can play together and have fun!

But we cannot do that without your help.

As of this writing we have already raised $400,000 as part of Phase II – Build the Kingdom and we have almost completed three of the four Kingdom areas and installed new play equipment.

But this progress cannot continue without your help!

Donate: While there will be many different ways to donate throughout Phase II – Build the Kingdom, offering your financial help now will go a very long way to getting us to our goal quicker. To donate, please click this link located here.

Volunteer: The Friends of Kids Castle committee is in need of help from the community in order to realize this goal. The start to finish time of this phases will depend on the success of the fundraising campaign and volunteer commitments. Volunteers with fundraising and marketing experience who can be leaders in our organization and that can help move the overall project forward are needed. If you have experience and can help in these areas, please click the volunteer link located here

The current Friends of Kids Castle community group was formed in the fall of 2012 to create a plan to save this iconic landmark – Kids Castle. After much discussion and input was taken from the community, a three-phase plan was adopted.

Phase I has been completed.

If you have questions about the timeline, or would like to know how you can help Build the Kingdom at Kids Castle, there are several online resources:

Facebook.com/groups/SaveKidsCastle: Additional information regarding the people and organizations committed to making Kids Castle remain a part of the community.

Please join and support our initiative. All donations of money, volunteer time, talent, and goods/services are welcomed. No gift is too big or too small to help Build the Kingdom at Kids Castle so all children can play together and have fun!

Our motto is “If everyone does a little, We can accomplish a lot.” Please help us.

Phase 1 – Save the Castle itself has been Completed

(The following is in past to present order)

Phase 1 – Save the Castle itself has been Completed!