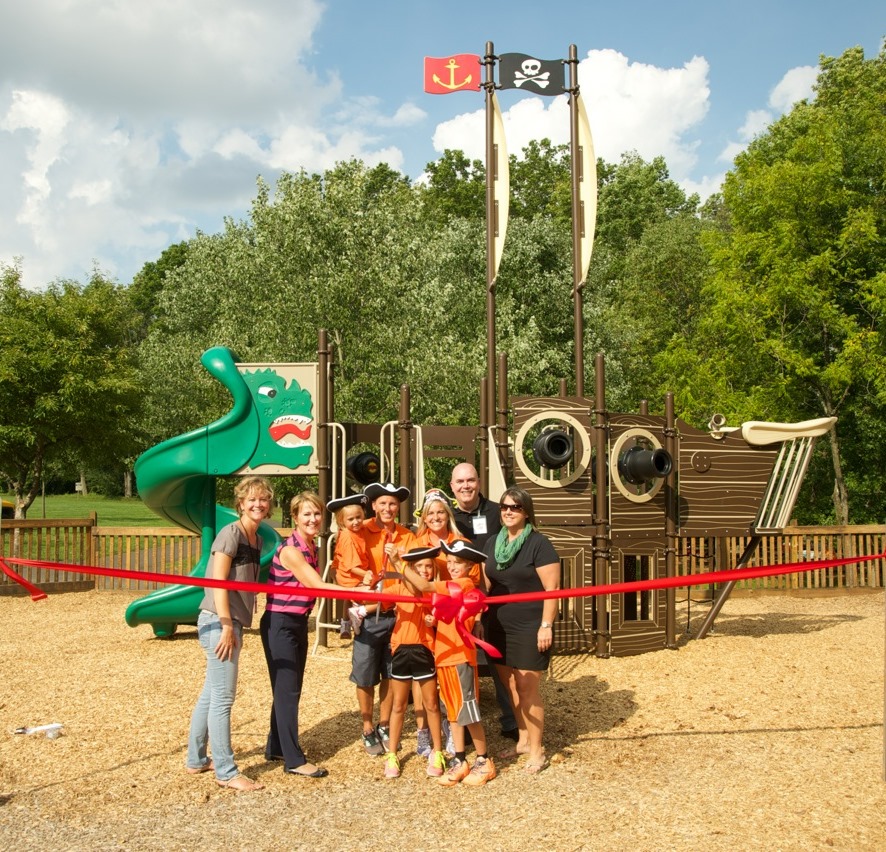 Our new Pirate Ship is installed and presenting wonderful adventures to all the children. Everyone had a wonderful time celebrating at the Pirate Party Ribbon Cutting ceremony that took place in September.

There was plenty of entertainment for all to enjoy starting with the wonderful music provided by DJ Lobie from Lobie Entertainment who set the festive mood for our event. 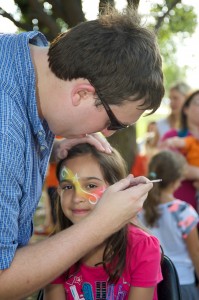 All our little pirates where running around with their faces painted by the talented Scott Stellwagon (215.595.6425) who donated his time and talent to help make this a celebration memorable.

Scott also works at FocusMX which is a large ongoing in-kind contributor to the Kids Castle cause – they completely redesigned our website and are helping Kids Castle in so many other ways.

CB Cares provided a fun free prize drawing with games for all the children to enjoy and also brought along a couple of volunteers who dressed as a pirate and tinkerbell – they helped make all the children feel very special. 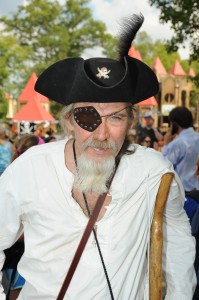 We also had three wonderful pirates from the Village Players dressed in full regalia interacting with the crowd – they came to us straight from the The Village Renaissance Faire.

Many wonderful volunteers from SoferWare helped set up everything for the event and hosted the Kids Castle table all day. SofterWare is a long time in-kind supporter of Kids Castle – they’ve been with us helping since the beginning of Phase 1. 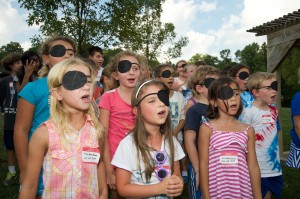 And it was so very special when Dr. Kahley, Principal of Kutz Elementary School handed over so many hand written thank-you notes that were made by all the Kutz kids to our Pirate Ship sponsorship .  Then they all gathered together, pulled out the pirate eye patches from their back pockets and proceeded to sing a wonderful ‘piratey’ song that they all learned in just four days. The crowd went wild with applause.

Then the big moment when the Pirate Party gave way to the ceremonial red ribbon being cut and all our little pirates rushed aboard the new Pirate Ship and had lots of fun.

A Big Thank You to Andrew’s Friends Fund our sponsor who fully funding the purchase of Kids Castle’s new Pirate Ship. Thank You for making all of this happen!

View More About the Pirate Ship

Although the Kids Castle Art and Beautification Committee is full of new faces and talent, the committee also contains a special group of Kids Castle veterans.

Though it’s hard to believe, these artists have been there since the castle’s beginning, some sixteen years ago. One of these dedicated creators is Pam Hamilton, who created the red and blue knights, which are the new castle guards.

How did Hamilton get involved with Kids Castle? The Hamilton’s were one of the many families who, along with local businesses, carpenters, artists, and other community members, helped create the original castle. While her husband Keith helped physically build the castle with his woodworking skills, Hamilton helped aesthetically build the castle with her painting abilities. At its grand opening on June 22, 1997, Hamilton’s four children (then one, three, six, and nine years old, respectively) were among the first of many to explore the giant playground’s numerous towers and slides. Though her children are now in their twenties, Hamilton quickly volunteered to step up once again when she heard that the castle, worn from age and endless hours of play by the children who loved it, needed a facelift.

So who is this person whose story is so intertwined with that of Kids Castle? Hamilton is a professional artist with a rich array of experiences and a long résumé. Even at a young age, she was inclined toward the arts, having “redesigned” her mother’s dining room rug by coloring the patterns a new shade of lipstick. After winning numerous art awards at Doylestown’s very own Central Bucks West High School, she continued her education first at Bucks County Community College on an art scholarship, then at Temple University’s Tyler School of Art, where she received a Bachelor of Fine Arts in 1982. While running a successful real estate practice with Keller Williams Realty using her creative marketing talents, she also learned several trades from the “creative ground up,” including the printing field as an art director for a print shop, and working for a friend who owns a sign business. As a testimony to her abilities, Hamilton’s work has been gifted to a collection of notable people, including “the Peace Troubadour” James Twyman, psychic and medium Sylvia Brown, the motivational speaker Zig Ziglar, and celebrity entrepreneur and talk show host Oprah Winfrey. 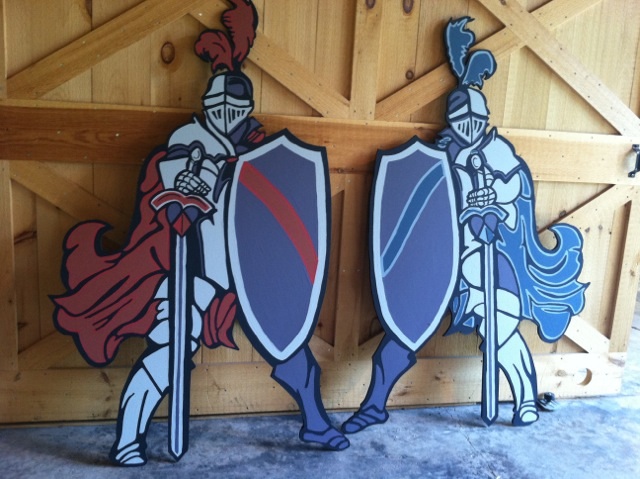 In addition to being an accomplished artist, Hamilton is also a spiritual leader. Besides practicing and teaching yoga and meditation, Hamilton fulfilled a lifelong desire to be ordained, and in 2004 received her Master of Divinity degree from the Beloved Community in Ashland, Oregon, as an interfaith minister. The following year she traveled to Italy with several of her ministry classmates on a two-week-long peace pilgrimage, during which she and her group walked from Assisi to Rome (which, at 110 miles, is a feat in itself!) The group was lucky enough to gain an audience with Pope Benedict XVI, after which Hamilton was honored to present His Holiness with a special piece of art.

Besides helping the Save Kids Castle initiative, Hamilton also engages with the community by creating pieces to help raise money for KW Cares, a public charity that raises “money through Keller Williams offices across North America,” via their annual auction. These days she can be found back at school, studying graphic design and illustration at Moore College of Art and Design in Philadelphia, or, of course, working in the studio inside her 200-year-old farmhouse with her three pups.

For more information about Hamilton and to see pictures of her work, visit her website, www.gracefullarts.com. You can also check out her Facebook page at www.facebook.com/GracefullArts, follow her on Twitter @pamh158, or read her blog, www.gracefullartsbypamhamilton.wordpress.com. 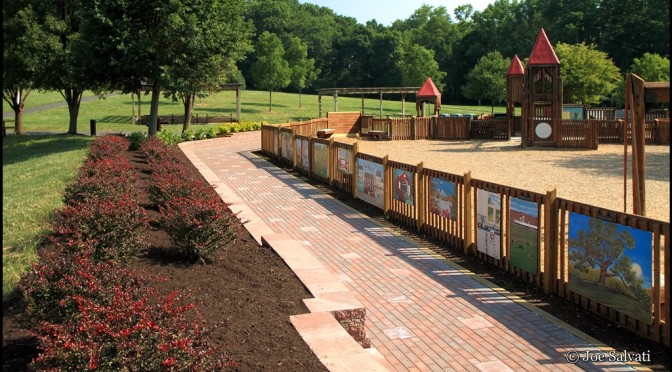 Work on the Commemorative Brick walkway at Kids Castle has been completed and it is now open to the public. As you walk along this path you will see all of the beautiful Murals, which were graciously painted and donated by local artists.

The subjects of this artwork are the beautiful scenic areas in and around Bucks County. The kids will also have fun with a little hide-and-seek game when trying to find our Kids Castle Dragon, Devlin hidden in each Mural.

You can also create a lasting memory and help Build the Kingdom at Kids Castle at the same time by purchase Commemorative Brick engraved with your loved one name. It will by placed on this beautiful walkway.

To find out more information click on this Kids Castle link now: www.bit.ly/BricksSKC

Make your memory last forever with an engraved brick place along this beautiful walkway and Help Build the Kingdom at Kids Castle at the same time!

Please get your Commemorative Brink now by clicking here: www.bit.ly/BricksSKC 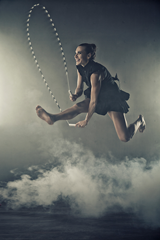 Thank you to The Cornerstone Clubs, Doylestown Township Parks and Recreation, Adrienn Banhegyi (“Jump Rope Girl”), and everyone who came out on January 18 to  Paul W. Kutz Elementary School to participate in the jump rope event. A fun time was had by all!

More than fifty children participated in the jump rope class led by Banhegyi, a native Hungarian, who has been jumping rope competively for fifteen years. She holds two world records and has several world and European championships. Besides competing, Banhegyi has appeared on television shows in both the United States and Canada, and has performed with Cirque du Soleil. She is passionate about sharing her love of jumping rope and physical exercise through her work as a certified personal trainer and a physical education teacher. 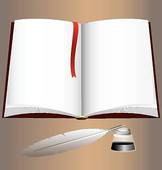 To celebrate the history of Kids Castle and the efforts of the Save Kids Castle project, we are building an accessible online database of photos and memories for everyone to enjoy.

We need YOUR voice! To do this, send us a handwritten letter of your memories of Kids Castle and why it’s significant to you and your family. If you’d like, you can also submit photos and drawings too. We will then scan the materials and add it to our library!

This is an activity the entire family can participate in! Sit down with your children and ask them what they love most about the castle and their favorite memories of playing there.

Maybe their favorite part was the twisty slide, or racing their friends to the very top, having a birthday party at the castle, or learning how to swing on the swings. Allow them to be creative. Encourage them to write the letter themselves, or if they can’t yet write, ask them to create a sketch!

Or maybe your children have grown up and they’ve gotten too tall to roam the castle as they did in elementary school. Maybe you’re an adult reminiscing on all the wonderful times you had playing at Kids Castle. Tell us about a favorite memory.

We believe that handwritten letters capture feelings in the most sincere and tangible way possible. Instead of type on a computer screen, these memories will be forever kept on paper and unable to be deleted. They will be a reflection of all the hard work volunteers have put into Save Kids Castle even after all the construction and revitalization work is done.

The Saving Stories project is an opportunity to preserve our community’s memories about Kids Castle, and forever lock our love for this special place into Bucks County’s identity. Years and years later, you can go back on the site and find your letter again to show your kids. It will truly be something special. Let’s make history.

1. Write a letter, find a photo, or draw a picture

2. Mail it to us with your name and contact information