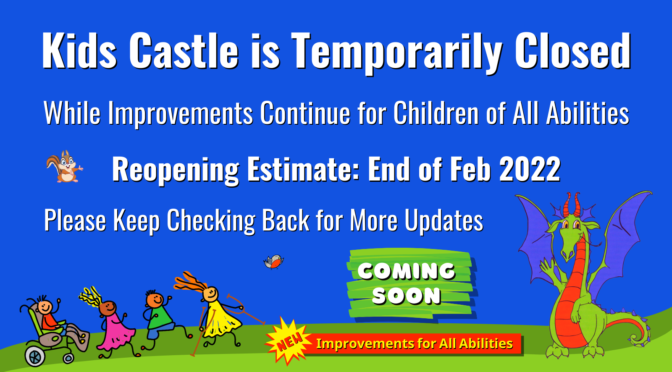 The Kids Castle playground is now temporarily closed while improvements continue for Children of All Abilities. The playground will remain closed until the project is completed.

We’re estimating to reopen toward the end of February 2022; weather conditions permitting. The size & scope of the project is extensive and there is a high probability for weather delays during the construction process, which will impact the timeline for reopening.

Central Park itself will remain open while the Kids Castle playground itself will be temporarily closed until the project is completed.

In addition to inclusive play upgrades, the size of play areas will also be increased and more Poured-in-Place (PIP) safety surfacing will be installed. This PIP safety surfacing helps provide equal access and ease in maneuverability for all.

There will also be plenty improved that is unseen beneath surface which will involve excavation & the installation of subsurface drainage pipes, rough grading, concrete formwork & pours, the install of a stone subbase, retaining walls, and so much more.

All of this after first deconstructing the areas to safely remove and store artwork and anything else that needs to be removed so that it does not get accidently damaged during the construction process.

Then, after all of this is completed… the installation of new play equipment and PIP Safety Surfacing begins, and then the safety inspections & testing before reopening – all of which are also weather dependent.

There is a bunch more involved, but you get the idea.

Fortunately, everyone who is part of our projects from the volunteers, construction workers, equipment & product vendors, and the Township personnel, staff & Administration are all Kid Focused First…

Meaning, everyone is fully focused on a swift reopening of the Playground as the goal while safely installing and testing everything first.

The only one not focused on this goal is Mother Nature. While plans are made ahead of time for potential delays – these delays do occur.

Again, we are fortunate to have wonderful people involved with all of our projects who adapt well to change and focus forward on a safe & timely completion of the projects.

This temporary closure of Kids Castle marks another step in the ongoing “Build the Kingdom” campaign, aimed at achieving and expanding inclusive play at the playground for children of all abilities including those of special needs.

The Friends of Kids Castle volunteers were instrumental in securing over $193,000 for these improvements through the generosity of individual donors, sponsors of play equipment, local businesses, the Township, private organizations, and the in-kind donations of goods & services.

During this temporary closure, new play structures will be installed that meet the needs of children with a variety of abilities at all ends of the spectrum to encourage and enable them to play with one another.

Children will be able to participate equally and independently at their own skill levels with their siblings, neighbors, caregivers, and friends.

In addition to these inclusive play upgrades, the temporary closure will also allow for improvements of the existing playground, including the installation of a new, more durable safety surfacing called Poured-in-Place (PIP), and the expansion of the playground to increase the size of the play areas.

The PIP surfacing will also provide equal access to the playground for all including ease in maneuverability for people using wheelchairs and other mobility devices.

The improvements that occur within the area for kids 2 to 5-years old will also include a one way in and out entrance to this play area, which will be surrounded by a fence in keeping with the theme of the playground.

This will help keep these smaller, younger children safer while the older, larger children continue to run around freely enjoying themselves outside of this younger play area.

The Kids Castle playground will remain closed until these upgrades are completed.

The Park itself will remain open during the entire project.

The ongoing “Build the Kingdom” Capital Campaign Project would not be possible without the generous ongoing support of volunteers, donors, the Township, and the entire community.

Volunteers are still actively fundraising for additional upgrades for Kids Castle that are needed for children of all abilities.

Please go to the Donate Your Way section of our website now to donate in any amount you can afford.

More updates on this Phase of the Build The Kingdom project coming soon!